I’ve been on Koh Rong for, I think, three days now.  The island is amazing.  There are supposed to be 20 beaches on the island and I’ve seen 3 of them.  I could seriously stay here for the next month just to see the rest of them.

After my first night here, I switched from the hostel/guesthouse that I was in to a ocean side bungalow.  I’m sharing the room with someone I met on the bus to Sihanoukville and then randomly ran into again on the beach there later that day.  The room itself is $25, but split between two people I’m paying $12.50 a night to sleep on the beach.

The accommodations are similar to the hostel.  There’s no electric in the room – although that’s because their main-land hostel just burnt to the ground because someone started an electrical fire.  The wifi here only goes on during the  day when the generators are running.  There is no hot water, and actually there is no piping to any of the toilets here to flush them either.  Instead you use a bucket to pour water from a spigot into the toilet and let gravity go its thing.  There’s no toilet paper in any of the bathrooms either – you can buy your own or use the butt-hose that’s in every S.E. Asia bathroom.

As for the island itself – there really are only 8-10 places to go.  Everyone serves nearly the same BBQ for dinner each night.  Chicken, Barracuda, Tuna, sometime snapper.  Oddly there’s a pizza place on the island – I want to go but haven’t yet.

At night everything turns into a bar.  I’ve been asking the “western” staff that works at various bars and it sounds like for $40,000 you can buy/build a bar/hotel on the island with a 8-10 year lease.  I’m completely serious when I say that if I could figure out what the financials look like – I’d buy and start something here in an instant.

A few other things about the island:

Marijuana is as common here as a pack of cigarettes.  The laws here…well I don’t think there are police here.  This is actually pretty similar to Sihanoukville.  Every bar and beach spot is another place to smoke, drink, read, and eat.

The island is covered with hiking trails (roads basically) from one side to the other.  While walking this morning I came across a water buffalo that was hanging out eating breakfast on the path I was hiking.  We stared at each other for a while, then I tried to walk around.  Then he changed direction and followed in the direction I was going.  Eventually I got around it, but this was a fun confrontation in the morning.

Two days ago I got up early to watch the sun rise.  Unfortunately there were clouds on the horizon.  I’m hoping that tomorrow morning will be better – but this wasn’t that bad. 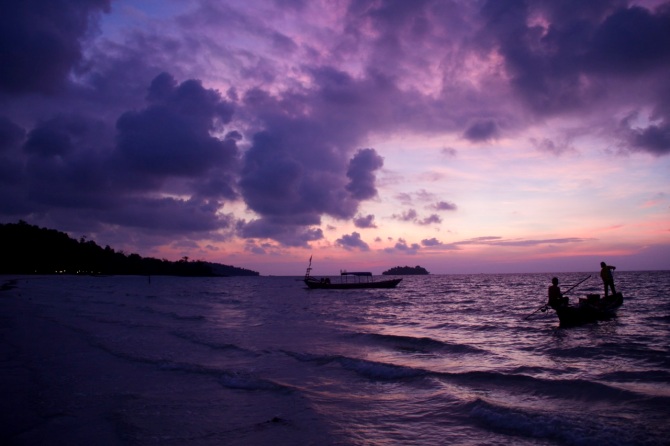 Finally, for the beach itself.  This is what I see when I look to the left and right of the area right in front of my bungalow. 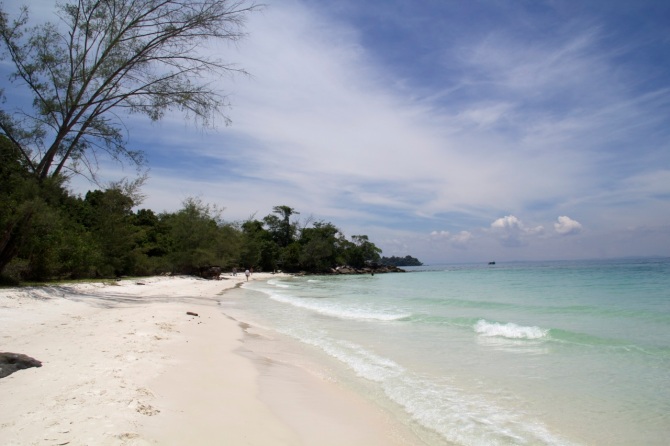