I have a confession to make.  If you know me well this won’t be a surprise.  I can’t sit still very well.

Spending the last 3-4 days in the south of Cambodia has tested the limits of my ability to s-l-o-w d-o-w-n and relax.  For the last few days I’ve been on the two main beaches of Sihanoukville – Serenity and Otres.  There aren’t many activities to do there.  You can:

There are a few pictures below that sum up the last few days.

As for today – I moved to an island today as opposed to part of the land.  I’m on an island named Koh Rong.  I’m in a bungalow.  The electric on the island is nearly 100% generator based…so in the afternoon it’s turned off.  This means no wifi during the afternoon, and no music at the 10 hotel/bar/guesthouse places.  There’s also limited hot water everywhere on the island…including in my bungalow.  This means take a shower during the day when it’s 90 and not in the evening when it’s 70.  Lastly, fun fact about the island.  The French version of Survivor was in the process of filming a season here until a contestant had a heart attack and died… 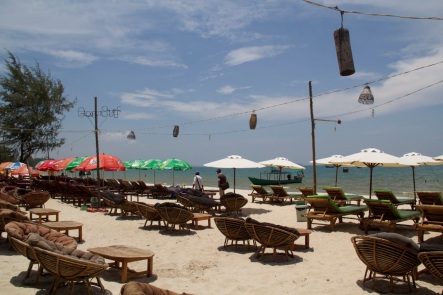