I’ve had trouble finding the time and words to explain Bangkok.  It’s most likely because I blew through the city (for a second time) on my way south 800 miles.

Two days ago I was sitting and Bangkok and wrote up a lengthy explanation of the last week with three different topics – Past, Present, and Future.  In that time I’ve left Bangkok, adding to the past, changing the present, and now I’m currently doing the things I wrote about in the future section.  I’m not sure why Bangkok managed to suck the productivity out of me, but it probably had something to do with the fact that it was 102 the second day I was there and sub-par airconditioning at my hostel.  It could have also been the near sleepless night I had on the trip down to Bangkok from Chiang Mai on a bus that was running 3 hours late leaving yet still managed to arrive to town on time.  After this bus ride, during which I was sweating most of the time, I really wanted nothing more than a good nap.  And so, instead of checking out the cultural and economic wonders of Bangkok (Grand Palace, 88-story hotels, ect), I drank a few beers, took a nap, and went out one night on the main street.

As a city, Bangkok is what happens if you combine New York City with Las Vegas.  It’s huge (you really can’t walk it), has shopping center after shopping center, skyscrapers, and equal amounts of  drugs and female prostitutes (and guys dressed as girls).  A couple times during the day I had my crotch grabbed – a cheap form of advertising.  At another bar, there were a couple of working girls who primarily sit around and drink or smoke and talk to the customers to see if anyone wants to buy their company for an hour.  One of them was nice enough to buy me a BBQ scorpion …which I’m pretty sure is what gave me a terrible headache for the next three hours.

In general, I kept a pretty low profile in Bangkok since I had another night bus (after swearing never again…) to take the next day to the islands of Eastern Thailand.  You can see below – the difference between a night in Bangkok and a night in any major US city is quite slim. 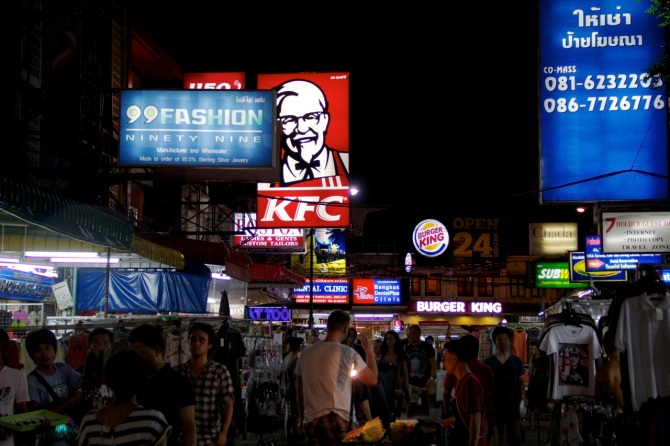