Cruising through the islands of Ha Long Bay in the fog, I felt that I had gone back in time to the era of dinosaurs.  Sailing around the pastel colored fishing villages, I swore I was in the midst of a BBC TV special.

Ha Long Bay is located on the northeast part of Vietnam, roughly 2 hours south of China.  It’s recently been identified as one of the seven “new” wonders of the world, and is one of the 962 UNESCO world heritage sites.  This distinction means that a committee has determined the site has “outstanding universal value.”  What all of this really means is that it’s somewhere you can’t miss if you come to Vietnam.

To book my trip, I took a taxi to the Little Hanoi Hotel, a nice looking hostel in the ‘old quarter’ of Hanoi.  On the way there I was slightly ripped off by my taxi driver.  Even though all of the taxis use meters, it seems that there are different settings for the rate the meter will increase.  While this ultimately sucks, getting “ripped off” by a taxi driver in Hanoi is the difference between a $2 taxi and a $3.50 taxi.  Most of me feels that the taxi driver could probably use that $1.50 more than I could, but the other part of me knows that those dollars add up over time.  Regardless, after being fleeced I arrived at the hotel and talked with the receptionist about the trip options.  Two day/One night trips run only about $20 less than Three day/Two night trips, so it made the most sense to go for the longer trip.  For $129 I had my option of one night on a boat and one in a hotel, two nights on the boat, or two nights in a hotel.  All of the nights on the hotel would be located on Cat Ba island – the largest of roughly 360 islands that comprise Ha Long Bay.  The $129 price included all of our meals, transportation from Hanoi and back, and access to all of the parks we would visit.  While this certainly does exceed the roughly planned $30 a day budget I’ve been working off of, Ha Long Bay didn’t seem like the sort of place to start getting cheap.

Eventually the morning I was leaving came; I got in another cab to the hotel (where I was getting picked up) and didn’t get ripped off this time.  About 45 minutes behind schedule (which was apparently right on schedule), my bus showed up and I started on the 3.5 hour ride to Ha Long Bay.

Before arriving, we took a pit stop at roughly the half-way mark of the trip.  This was a bathroom break disguised as a shopping center.  We had 30 minutes here – we got out of the bus, had to walk through the front of a shopping center where we were greeted by local Vietnamese teens (my guess) making hand stitched art, and eventually walk through shelves of silk clothing, knick-knacks, jewelry, and other things.  I don’t think it was all crap, and $13 for a silk (supposedly) tie and matching cufflinks isn’t a bad deal at all.  Fortunately for me, this pit-stop had wifi so I was able to kill the time by catching up with a few people.

Eventually arriving in Ha Long Bay, we were shuttled to our boat for the next three days – The Fantasea.  Despite all of the fancy looking pictures in the book when I was picking out the tour – there were no questions about it, this was a junk boat the same as every other junk boat that was out on Ha Long Bay.  Not that this was a bad thing, but if you go, don’t expect your boat to look fancy.  Warped wood, chipped paint, and rough splintered edges were the flavors of the boat.  Speaking of flavor – once on board, we were met with a fantastic lunch.  In fact, all of the food (except for one breakfast) was fantastic.  Every meal included a pork, chicken, beef, noodle, and fish dish.  Most meals were finished with apples and watermelon  The one meal that was bad?  A breakfast at the hotel that included fried eggs that were somehow cold.  Clearly these eggs were made the night before …nobody at my table that morning ate their eggs.

As for the tour itself, on the first day we climbed to the top of one of the large stone structures (I’m not really sure what to call them – mountains, rocks, peaks, something else?) to get a great view of the water.  It’s end to end with boats and more rocks.  In the picture below, you can tell that it was a bit foggy or hazy – this didn’t change the entire time we were there. 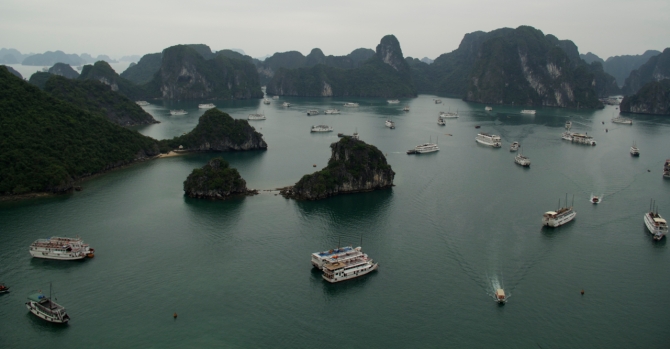 After the climb, we eventually went through a cave, and had the option to do about 45 minutes of kayaking.  With no sun and the fact that it was getting late in the day, I didn’t find the urge to put on a bathing suit and possibly get wet – so I skipped the kayaking.  Yeah, and the caves…were caves.  Nothing special there.

Other highlights of the trip came on the second day.  We had an hour long hike up one of the islands through what was essentially the jungle.  Five of us made the trek and were greeted at the top with…fog.  It was during this hike that I learned all I ever needed to know about the Vietnam War.  These were steep and pointy limestone rocks that we were using as stairs.  At some points there were no railings and you did not want to fall or slip.  The picture below is one of the areas that did have a railing – which was really an indication of how much you really didn’t want to fall in that spot. 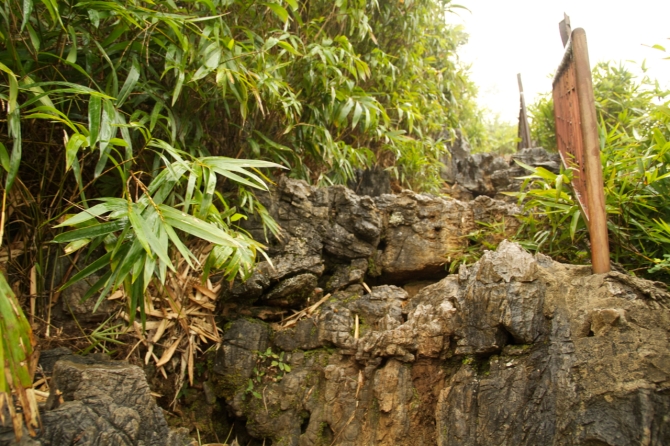 The third activity worth mentioning was our trip to “Monkey Island.”  Monkey Island offered two things that I really liked.  Monkeys and another steep rock to climb.  The climb itself was actually much more dangerous than the one earlier in the day.  These islands seem to be made of limestone.  Limestone that has, over many many years, become near razor sharp and extremely pointy.  There were more than a few points where I was pulling myself up and around various places …or even walking, and thinking that I would end up with a hole in myself if I were to slip.  In the end, I was able to get to the summit of Monkey Island and get this picture. 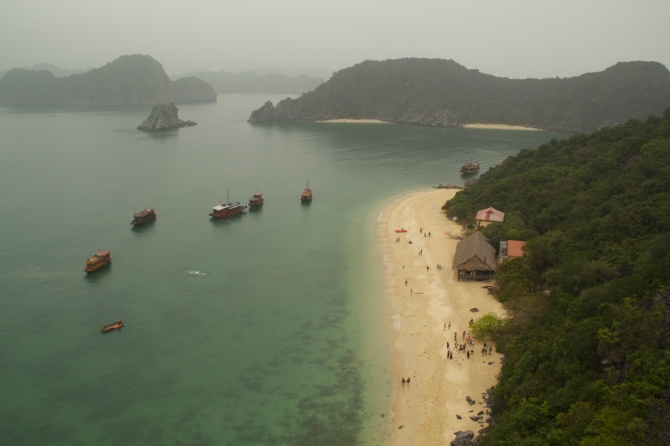 Lastly, yes there were monkeys.  They seemed to be concentrated in the area of the straw hut that you can see in the picture above – coincidentally where the food was.  There were about 10 of them around – some old, some young.  There are more pictures of the monkeys that can be seen on the photos section of this site.  In the end I took about 100 pictures of various monkeys being monkeys, but this one may be one of my favorites. 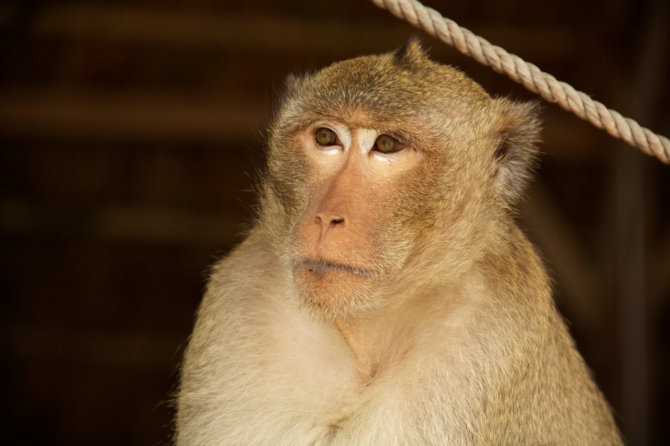 All told, the trip was well worth the $129 it cost.  There were no hidden fees, although the price of beer on the boat was slightly above average for Vietnam.  Essentially this means that beers were $2-$3 a piece.  Toward the end each new island felt similar to the one before it, and I found myself more fascinated by the fishing villages and thinking about the people’s lifestyle than the natural beauty all around me.  Three days is probably the maximum that anyone would need to see all of Ha Long Bay and get a feel for the things that it offers.

Finally, anything about Ha Long Bay wouldn’t be complete with at least a brief mention of the various fishing villages we came across.  Essentially, these are floating islands where people live and work – some never stepping foot on land their entire lives.  There are no words to even attempt to comprehend a life on an ‘island’ like the one below. 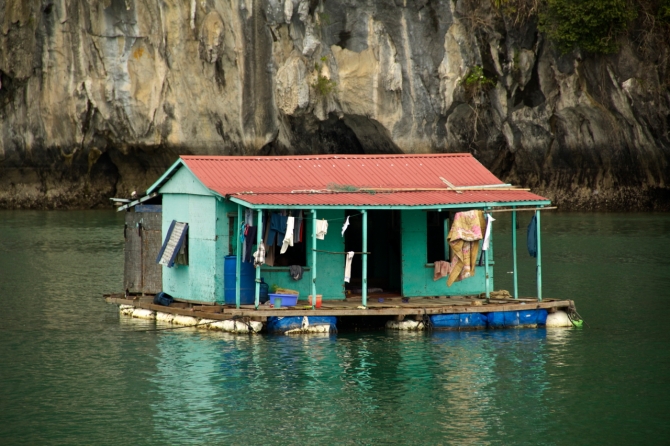