Babe I’m gonna leave you.  I wanted to give you all my love, but now I’m just dazed and confused.  There was some sort of communication breakdown – a city filled with an endless supply of coffee shops and restaurants – now I realize you are somethin’ else.  You’ve given me the traveling riverside blues and it’s nobody’s fault but mine.  Melbourne, your time is gonna come – I’m dreaming of a white summer.  Right now though, I’m a fool in the rain and it’s too cold to go down to the ocean.  It’s time to ramble on.

(For some reason I’ve been on a Zeppelin kick for the last two days – perhaps I’ve gone from ‘writers block’ to ‘brain mush’.)

I wanted Melbourne.  I wanted to like it here, to love it here.  I went out of my way to get here.  Oops.  (When booking flights to Australia from Singapore, nearly all of the flights went to Brisbane or The Gold Coast.  Both of these places are in the middle of the east coast of Australia – compared to Melbourne which is located on the far south of the continent.)

The plan for Australia was to pick a city, move there, find a job for a few months, save up some  money, and then travel the country for two months.  I can’t say exactly why I picked Melbourne – I know two people here, it’s supposed to be like San Francisco, tons of cafes, a big biking community, the fact that it’s actually a city.

It’s not that Melbourne is ‘bad’ – it’s lovely.  It’s also a very large city with a limited amount of culture.  It’s just a giant hub of …people working.  I don’t know what I was expecting – expectations are never a good thing – but whatever expectations I had…I suppose they aren’t met.  It’s also possible that going from places where it was sunny and 90 everyday to a place where it’s cloudy and 60 (on a good day) has gotten to me.  Ten minutes ago it was cloudy; five minutes ago it was raining; now it’s overcast and almost sunny.  In another five minutes there could be a Snarknado and I wouldn’t be surprised.  My other thought is that I’m in a bit of a ‘culture-shock’ phase right now.  I walked into the main open air market the other day and felt confused by the fact that all of the meat was in refrigerated product displays.  The meat didn’t have flies flying around.  The best way to describe it is with the picture below.  Depending on the country you’re viewing this from – it has a completely different meaning. 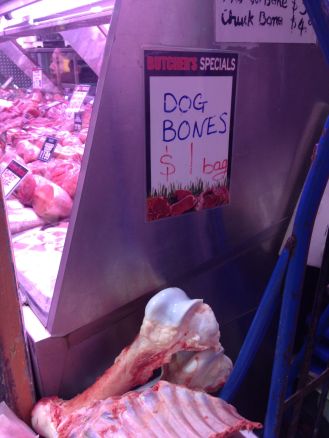 So what can I do?  Well I’m going to head north.  Closer the sun.  Closer to the beaches.  Closer to the touristy areas of the country.  Places where rent goes from around $300 a week (Melbourne) to $150 a week (Sunshine Coast), yet minimum wage is still the same $15 per hour.  If I do decide to find a short-term job, this should be better for saving money, and perhaps better for my own sanity.  I’ll find a random and menial job for a while (ice cream parlor or candy shop perhaps?) and enjoy the sun and beaches.  After a few months, when it’s warmer in the south, I’ll head back down in this direction to check out all of the things I thought I would make weekend trips to while I was in Melbourne.  (12 Apostles, Great Ocean Road, ect)

Fortunately I haven’t bought too many cold weather clothes – one pair of jeans, one long sleeve shirt, and one light jacket.

So when do I go?  TBD.  I recently opened a bank account here and my ATM card is being mailed to the hostel I’m currently staying at.  I need to check if I can have another one ordered once I get to the next place, or if I have to get this one.  Similarly, I have my tax number card (like a Social Security number) being sent to the hostel – I either need to have someone dig through the mail every day looking for it, or see if I can have it resent to another address.  As I’m paid/booked through Sunday, I’ve got a few days to put the rest of the plan together.

Well it’s Sunday.  Not much has changed – two days of non-stop rain has led me to finish two books and catch up on a season of a TV show.  I’ve settled on the idea of of flying to the Sunshine Coast – a small city north of Brisbane where the temperature will increase drastically.  I haven’t purchased a plane ticket yet – but that will happen later today.  In the meantime, there are a few things I’d like to do in Melbourne before I go (although I really do hope to come back).  I want to go back to Hosier Street to see what new street art has popped up, and I want to go to Lygon Street (Little Italy) and have a full Italian dinner but have each course at a different place.  Hopefully I can cram those two activities into the next two days while it’s (surprisingly) sunny again.