So many things have happened between July 1st to 4th that the simple thought of writing everything out feels like lining up to run a literary marathon.  As I look at the random notes I’ve written down along the way, I still don’t even know where to start.  Singapore is amazing.  Couchsurfing is amazing.  People are amazing.  This trip has been amazing.

July 1st:  I started writing the story of July 1st months ago.  It could be argued that the story of July 1st started four months earlier on March 1st.  March 1st was my last day of work at Epic.   After three years of life draining work and the 75 hour work weeks that accompanied it, I realized that it was time to reclaim that parts of my soul that I had previously sold. In retrospect, March 1st isn’t the day that I quit Epic; March 1st is the day that I restarted my life.  And so, July 1st was a significant day because I was reminded that it had been four months since I started this adventure.  While the genesis of this trip was jumpstarted as the result of a generous gift, it was only a matter of time before I would decide to veer off the path I had been traveling.

July 1st:  A few hours earlier in Kuala Lumpur, I decided that July 1st would be the day that I changed the direction of this trip.  My ticket to Bali was for July 1st, and I was going to go spend two, three, or four weeks doing…something.  It certainly would have involved diving.  It may have involved learning to surf.  There would have been rice and noodles.  The thing is – I felt like I had done all of those things already.  It was time for something different – something new.  I decided that I wasn’t going to use the ticket.  I contacted a friend in Dubai about visiting.  I looked into flying to Eastern Europe, Scandinavia, and eventually linking back up with all of the European friends I’ve met over the years.  One option was flying to the west coast of the USA and slowly working through all of the cities and national parks I’ve heard about but never seen.  All of these ideas were appealing, yet none seemed right.  Eventually I settled on Australia, but not as a tourist.  The idea is that I would check out a few cities and then pick one to stay for a few months, get a random job, take road trips on the weekends, and fully integrate into a new city of my choosing.  In this way it would be the complete opposite of the last 3.5 months – one city and one country.  Everything about this idea felt right and I felt like I had a clear vision for the next few months.

July 2nd:  Arrival in Singapore.  Holy crap.  This city is amazing.  The only way to describe the city is an amalgamation of Las Vegas (for its ‘showiness’), New York (for its skyline and ‘go-go-go’ work attitude), Miami (for its tropical climate and club scene), and the capital of every Asian country within a 1500 mile radius (for its culture and food).  Everyone is dressed to the nines.  The amount of money floating around the city is unfathomable.  BMWs, ‘Benzes, and high end Audis line the streets. Lamborginnis  and Ferraris can be found once every few minutes.  Prada and Gucci cover the women as they hit the sidewalks – especially at night.  Tourist attractions cover the city.  Food courts with wide ranging selections of  every Asian countries best dishes are everywhere.  Food.  There is so much food everywhere!

July 2nd:  While Singapore is absolutely “in” South East Asia …it has nothing in common with the rest of the SEA countries besides the fact that its people are Asian.  This is a country of $5 espressos, $15 scrambled eggs, $22 beers, and high-end shopping malls.  It’s a country where toilet paper is expected and spitting is illegal (along with jaywalking and littering).  In this way, July 2nd marked the end of my South East Asian adventure and the beginning of my Australian one.  With the exception of Laos, I can look back and say that I completed the trip that I set out to do.

July 2nd: Reread the first comment on July 1st.  July 2nd marked the four month anniversary of my unemployment with Epic.  The realization that in four months of unemployment I have spent less than one paycheck and done (at least) four times the amount of living is an amazing thing to sit back and contemplate.

July 3rd:  One of the reasons I wanted to go to Bali for my birthday was the beach bar and party scene.  Not content to just have a birthday, I wanted to have a birthday.  I knew Bali would facilitate that – I had no idea what to expect from Singapore.  With that in mind I made a post on the Singapore CouchSurfing forums that simply said I would be in town for my birthday and was curious if anyone wanted to meet up to party.  I received a ton of responses and offers to go out clubbing with different groups of people.  One thing to note is that July 3rd was on a Wednesday this year, and Wednesday is “Ladies Night” in Singapore; nearly every club in town offers free admission and at least one free drink to ladies on Wednesday.  I settled on meeting two different groups of people.  I also took along a guy I met earlier that day at the hostel from San Francisco that had a very similar travel story to mine. 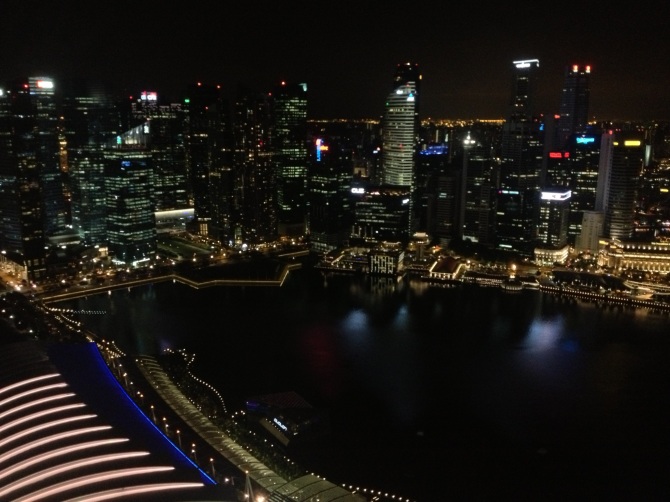 The first person I was going to meet was someone named Josh and his friends for “some drinks” from 7-9pm at a bar.  As it turns out, Josh runs his own media and marketing company and “some drinks” was actually a promotional event for a new Hennessy blend at an upscale bar.  You had to be on ‘the list’ to get into this place.  Some drinks meant that from 7 to 9 all drinks were free as long as they had Hennessy in them.  I’m not sure how many of those we had before 9pm came around.  As each new drink arrived, so too did another one of Josh’s friends.  I don’t remember all of them, but the one I do happen to remember was a semi-professional pole dancer.  Apparently there are competitive pole dancing competitions – she showed us a couple of videos she had on her phone.  I most certainly must attend one of these in the future.  We stayed at this bar – KYO – until around 10:15; however, once 9pm came around our free drinks turned into beers that cost $20 a piece.  It was at this exact moment that I realized I hadn’t had enough of the free liquor. 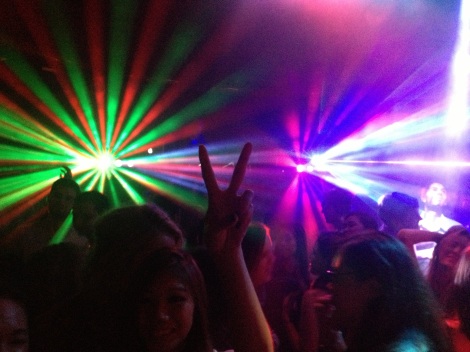 At 10:30 I was supposed to meet a small group of three local girls at a club called Ku De Ta.  Located at the top of the Marina Bay Sands Skypark, this sky lounge has three different bars and nightclubs with spectacular views that overlook the city.  (According to Wikipedia: “Developed by Las Vegas Sands, it is billed as the world’s most expensive standalone casino property at $6 billion, including cost of the prime land.”)  Everyone from KYO walked to the club, but as our group had grown in size the pace of the walking was infuriatingly slow…and we were late.  Eventually we found Dinah and her group of friends and went up to the 57th floor to enter the club.  The dance floor was small and packed.  More space was actually available around the edge of the bar overlooking the city than there was to dance.  Similarly, the “members only” and “VIP” sections that were roped off in various places made the area feel even smaller.  That said – the views were amazing from the top.  Eventually we made our way to the bar and I ordered a Vodka/Redbull and braced for the impact.  $22 Singapore Dollars, …roughly $18 USD.  Ouch.  The ‘well’ vodka at this bar was Grey Goose, which could explain the high cost.  I’m always skeptical of any bar that uses high-end vodka in their wells because you never actually see them opening the bottle and can’t be certain of what’s actually inside.  A bit of dancing later I went back to the bar and asked for a Stella – another $22.  Although these are considered the ‘normal’ prices of drinks at clubs in Singapore, I decided that I wasn’t actually going to have anything else to drink for the night.  I refused to pay $7 for beers in Malaysia because they were too expensive; there was no way I could continue to drink $18 beers for any occasion. 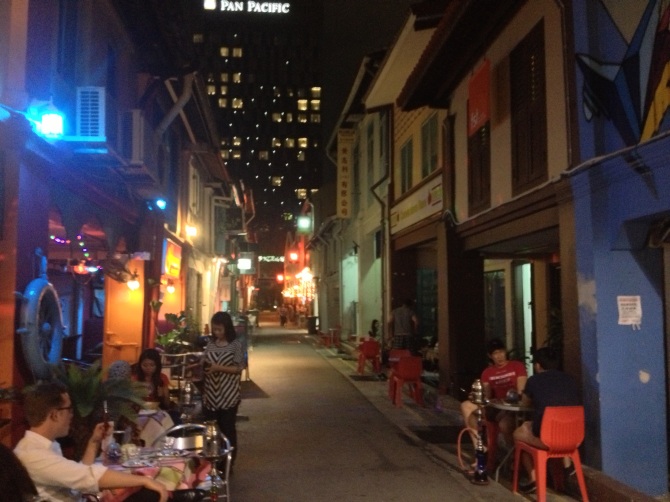 July 4th: The previous night at the bar Josh told us about a Chinese place that served fantastic butter crab (and other food) that we needed to go to while we were in town.  On the evening of the 4th we met back up and went.  Dinner was butter crab, chili crab, seafood rice, deep fried yam, Guinness BBQ pork spare ribs, and a few other sides.  The food was fantastic, although apparently not cheap.  The total was $144 Singapore Dollars ($115 USD) for the three of us and Josh insisted on paying because it was, “America’s Birthday.”  After dinner we met back up with a (crazy!) Korean girl from CouchSurfing we had met earlier in the night and went to grab some drinks while waiting for a few of Josh’s other friends.  Eventually it started raining and we had no choice but to keep drinking while at the bar since we couldn’t leave.  Since Josh had picked up dinner, Mark and I split the cost for one ‘tower’ of beer (3 liters I believe) and the shisha they had smoked – a total of $104 Singapore Dollars.  As the night went on the six of us migrated to a large pool hall.  The night ended around 3am when we Mark and I taxied back to the hostel – he had to be up in 3 hours for a plane and I planned to sleep in late that morning.

One thought on “Four Days of Highlights, Headlines, and (…ugh) me Rambling”