How do you say, “I’m sorry officer” in Vietnamese?

I’m going to start with a confession.  I’ve been breaking the law in Vietnam for about two weeks.  I don’t have a Vietnamese driving license, nor do I have an international license.  The thing is – it’s illegal, but everyone does it.  A few years ago the Vietnamese government publicly undertook two initiatives related to their roads.

First – they made a commitment making the roads safer, and making them better.  Throughout all of my rides I’ve seen roads under construction.  I’ve driven on some these new roads and they are fantastic.  Most of these new roads have two lanes specifically for motorcycles and are completely flat.  They are a fantastic gift to drive on.

Second – the government knows that tourism is helping the country and that people come here to ride from Ho Chi Minh to Hanoi (or the other way).  Although many of us (tourists) do not have a license, we do have something else that translates equally into permission to drive on the roads here – the almighty dollar.  (Note that I have certainly read a few stories online of people having their bikes taken due to people driving without the proper registration and paperwork.)

Both of those things out of the way – I got pulled over twice (in one day!) on my way to Ho Chi Minh.  It actually makes sense that I got pulled over on the way into the largest city, and that I never saw a single cop in the mountains.  The first time I was pulled over I had to pay a “fee” of 300,000 Dong ($15), and the second time it was 500,000 ($25).  Clearly this wasn’t an official punishment or else the price would have been consistent.

Legality out of the way – the next thing worth discussing is the risk associated with doing something like this.  In all I rode roughly 1,200 kilometers (roughly 750 miles) through Vietnam.  During this time I saw one bus accident, and two motorcycles on the ground.  While I personally found the roads and driving conditions to be tolerable, it should be said that driving becomes a full time job that requires the full attention of all of your senses.

The first thing that you need to know is that there really are no rules on the roads.  On a standard two lane road (a car going in each direction) you will also find a shallow shoulder for bikes to ride on (also in each direction).  This would imply that a typical traffic pattern involves two lanes of motorcycles and two lanes of cars each going in their respective direction.  This is wrong.  In fact, at any time a truck could be passing a car, who is passing a bus, and three lanes of traffic are coming right at YOU while you are ON the motorcycle shoulder.  Simply put – the roads are the wild wild west.

This brings us to the second thing you need to know about driving.  EVERYTHING AROUND YOU!  If at any given moment you may need to swerve out of something’s path, it’s crucial that you are constantly assessing your position on the road.  Is there anybody behind you on the left?  What about the right?  Is there anyone on your side?  How far ahead of you is the next car or bike?  This is really just the start, because you also need to make sure that the shadow in the road in front of you isn’t a giant pothole.  Those are things you’re going to have to dodge.  Similarly, what’s that thing in the road up ahead?  It looks like a red colored leaf – so it’s probably safe to drive over right?  Wrong.  At 40 miles per hour the difference between a leaf on the road and a brick that fell off of a truck is the difference between making it to your hostel on time and a broken leg.  During my time on the road I saw potholes you could fit watermelon into, and large slabs of  limestone randomly out on the road.  Oh, and animals.  When you come across a rural city, in addition to dealing with the idiots on motorcycles talking on their phones, the people on actual bicycles, and people walking, you also have to watch out for Spot as he runs into the road for no reason.  And cows.  In the hierarchy of road rules, cows are the only thing that seem to trump the buses right to run everything over if you don’t move when they honk at you.  So – here’s what driving a motorcycle in Vietnam is like.  Who is behind you?  Who is in front of you.  What’s that thing in the road.  Let me look in my mirrors again.  Are there still no potholes coming up?  Crap there’s a bus coming and he’s going to honk and expect me to drive into the dirt – where can I get over?  It’s that for 3-4 hours a day.  And it’s awesome.

Along the way I was able to drive up and down a ridiculous mountain, along fantastic coastlines, and see some amazing rural villages. Some of the turns and roads were sights out of a car commercial.  Below is a screenshot of one section of road I got to drive down.

So what does 750 miles look like in Vietnam?  The map below is a good guess of the path I took – although as I’ve mentioned I can’t quite be sure of all the details. Ultimately the route was: Hoi An, Quy Nohn, Nah Trang, Da Lat, Mui Ne, Vung Tau, Ho Chi Minh City.

Oh…and the bike never technically broke down!  Early on in the trip I apparently left the headlight on one day.  As a result, the bike wouldn’t start in the morning.  I had to buy a new battery.  You can see that below – that hole is where a battery goes, and the area was just a collection of bike mechanics on the side of the road.

Shortly after getting the battery replaced, I was driving across a long long bridge to go to an island…and then the bike died.  It was pretty clear that the connection on the battery came lose since it wouldn’t start at all AND the horn was dead.  So there I was, on a bridge, with nothing to do but push my bike for 15 minutes in the direction of land.  Eventually I found another mechanic.  He pulled open the battery compartment and we found two wires that were wound around a screw and missing most of their insulation.  Good times.  While there, I also had him look at the oil.  Water, dirt, antifreeze, and a little bit of oil.  So yeah we changed that.  Eventually I also decided that I did want two sets of brakes too, so he replaced the brake line for the rear brake.  In total I spent about $35 dollars on repair costs that day. 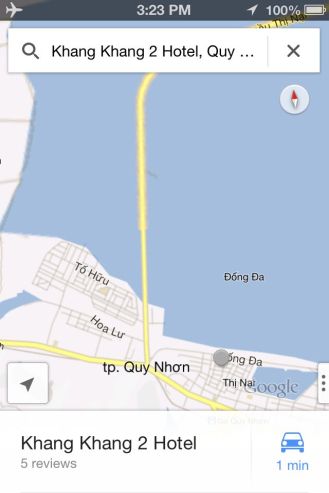 So yeah, that about sums up the total experience of biking through Vietnam.  The gallery below has some other pictures that were all snapped with my phone for one reason or another.  One thing worth calling out – the small headstone-like rock you see….that’s the closest thing to a highway sign that you get in Vietnam for most of the drive. 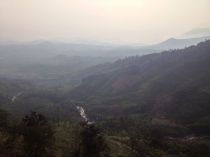 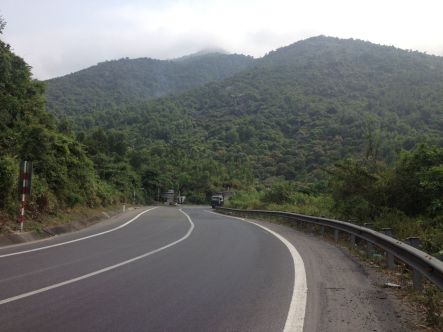 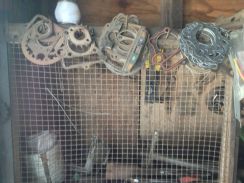 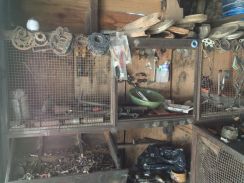