Yesterday I was in Da Nang, a city I specifically stopped at because of what Google and the internet had to say about the beaches…

Unfortunately, yesterday may have been the most disappointing day of this trip.  Everything started off well enough.  The train ticket that the hotel in Hue offered to buy me ended up being 95,000 Dong – about $10.  This was much cheaper than I expected.  As I got to the train station, I discovered that the reason it was so cheap was that they purchased a ticket in the cheapest possibly cabin, even though I specifically asked for a “soft” seat.  Oh well, what’s 2.5 hours on a wooden seat with no air conditioning, at least it was still early in the morning.  Another benefit of this cheap seat – I got to mix it up with the friendly looking locals.  They look friendly right?  Plus, as you can see, there was totally air conditioning on the train! 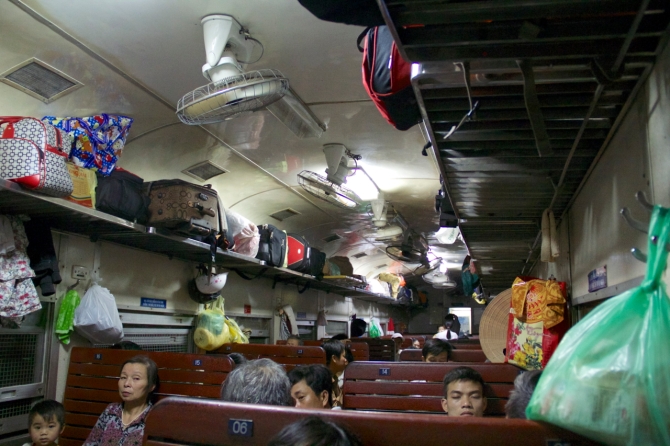 The train ride was absolutely stunning.  We went through and over what I can only describe as “jungle mountains.”  More than anywhere, this was not a place I’d ever want to be carrying a backpack and gun in the pouring rain.  Here’s a picture, although I hope to put some of the video I gathered up soon enough.

After arriving in Da Nang I walked roughly 1.5 miles to my hotel.  I paid about $20 for the hotel, although I can’t remember the exact price.  The staff was indifferent with my presence at best.  When I Initially got to my room the toilet was running, and as it turned out , wouldn’t flush.  I let the office know and then set off for a walk to the beach.  My plan was to walk to the beach, find lunch around the various beach food places, find sunscreen (something you would expect to be around the beach), and eventually finish reading Paradise Island with a drink in my hand underneath a straw hut.  I was under the impression that these things were possible because of pictures like this online: 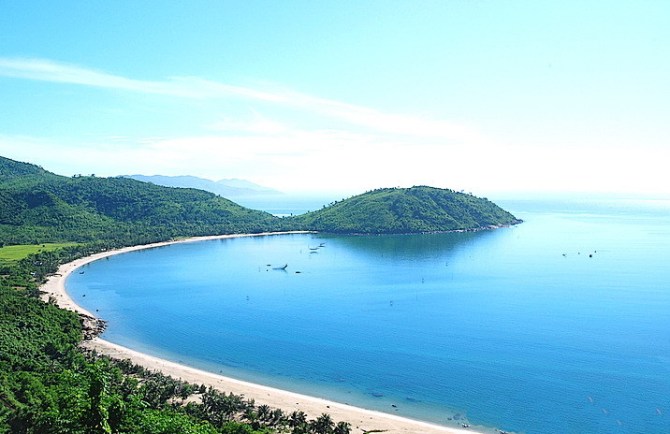 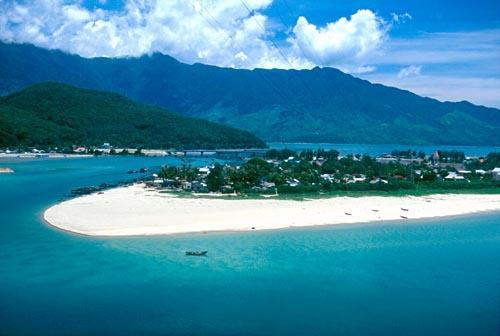 I don’t know where those beaches are, but they were not where I walked.  Perhaps they were somewhere further south and east along the coast.  Instead I found this as a beach.

Needless to say, I didn’t really find anywhere to read.  In fact, I didn’t find anywhere I wanted to stop.  So I kept walking.  And walking.  And walking some more.  Eventually I looped all the way back to my hotel about 3.5 hours later.  I never found anywhere selling sunscreen either.  So I walked for 3.5 hours in a wife-beater, in the sun, in the 90 degree heat.  I did eventually find a bottle of water.  And blisters, since sandy sandals and a 3.5 hour walk don’t mix.  In all, based on Google Maps, it appears I walked about 15km, or 9.3 miles.  All of this on a tiny breakfast since I didn’t want to have an immediate needs to go to the bathroom on the train.  If I recall correctly, I had about 4 pieces of pineapple, some rice, a few pieces of potato, and a piece of toast with butter – all around 6:30am.  So yeah, I was hot and hungry.

I eventually found food – it took a while since I was looking for food food.  Some place with a menu, and not the kind of roadside food that serves only one thing since that’s their specialty.  I eventually found one, after realizing that my hotel isn’t near anywhere that counts as a restaurant.  The prices were cheap, as it turned out that’s because they were a Vietnamese tapas bar.  Oh, and the menu was only in Vietnamese.  I threw out the couple of Vietnamese food words I knew, and the lady pointed to a few things on the menu.  I said yes and smiled.  Eventually I was brought two different plates of…I really don’t know.  Later with the help of Google I found a third thing to ask for.  This stuff wasn’t filling at all and I was tired, so eventually I left for a nap.  Ironically after I had paid and right as I went to stand up, a large rat scurried past me along the wall.  At least I now know what I was eating.

You can see the menu in the background. 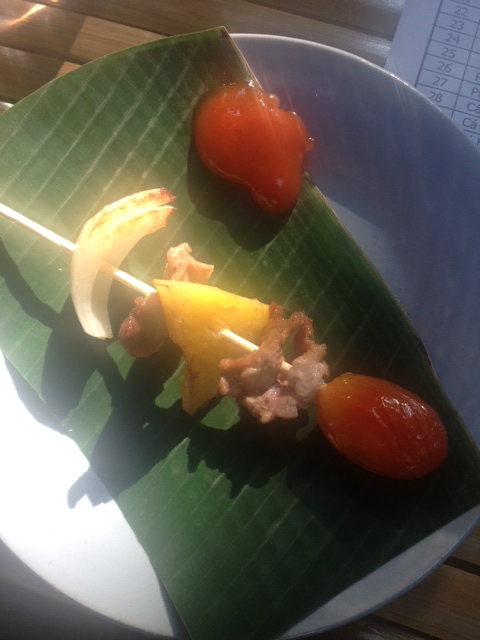 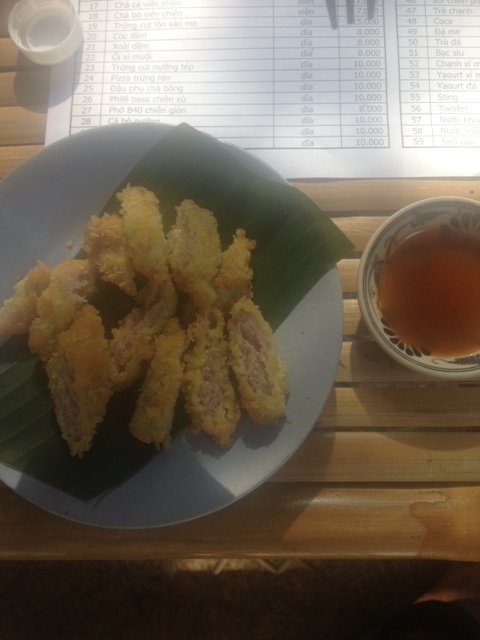 Based on my limited understanding of Vietnamese…this was pork.

In all, everything above pretty much summarizes my entire time in Da Nang.  I went back to the hotel and took a very sun burnt nap.  I woke up about 2 hours later and decided to sleep some more.  Eventually it was around 7pm.  I decided that I could either go find dinner and deal with the fact that my feet hurt, or just go to sleep and see how long into the night I could make it.  I ended up deciding to sleep – knowing that my plan was to wake up around 5am to get the bus to Hoi An.

As I’m writing this from Hoi An at around 1:45 in the afternoon – I can say that Hoi An is already a much better city…