The following is a collection of random thoughts and stories from the last few days:

My father has a T-Shirt that says “I’m smiling because I have no idea what’s going on”.  I should have been wearing it today while sitting down at a random cafe and trying to order lunch.  Eventually I pointed to two different dishes that other patrons were eating that looked good – spring rolls and some sort of dish that involved deep fried rice paper, onions, beef, garlic, …and I have no idea what else.

Since it’s easy to tell I’m not from here, I regularly have people ride up to me on their motorbikes and say “hello”, followed by “where are you from?”  These people aren’t genuinely interested in where I’m from, but instead are opening a conversation which then involves a laminated sheet of English words explaining that they are selling something and the proceeds go to charity.  This is fairly common as I travel, although never in my life have I met someone selling TOOTHPICKS for charity.  The third time this happened I started responding to them in Spanish thinking that would be the end of the problem.  I was shocked when they started speaking Spanish back to me.  Next time I’m going to Russian.

I heard a cat meowing the entire time I was eating lunch today, but couldn’t figure out where the cat was.  Given that the cat continued to make noise throughout my entire lunch, I’m fairly sure I didn’t eat him.

Everything in this city comes with dipping sauce, hot sauce, and chopped up chili peppers that you can use to accentuate your meals. This pleases me greatly. 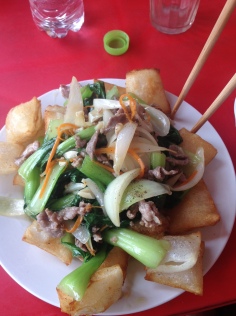 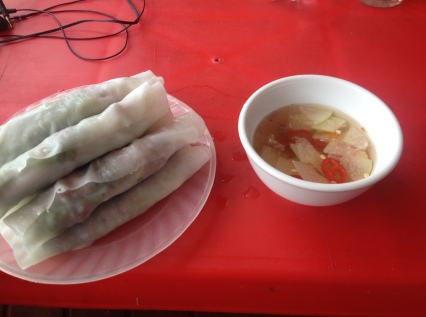