Twenty-five days ago I left Taiwan in search of adventure in Malaysian Borneo.  There would be endless possibilities for excitement – Kota Kinabalu (the highest mountain in South East Asia), Sipadan (considered the best diving in the world), Survivor Island/Pulau Tiga (where the first season of Survivor was filmed), Orangutang Sanctuaries, Jungle Treks, Caves, and a stop into Brunei to add another country to this trip.

As a child, my father and I would make bird houses in the spring.  (We once even made a ‘bird hotel.’)  I remember that I enjoyed creating these things and always being excited to start our project …and at that exact moment he would ruin all of the fun by saying that we had to draw out what the bird house would look like on grid paper so that we knew what we were building.  What an idiot – we’re building a bird house, it should look like a bird house, and certainly by now you should know how to make one.  Supplies?  There are nails and wood in the basement – how could you have not known that?  So what does this have to do with Borneo?  Everything.

Borneo was a shitty bird house.  (Perhaps even the second one I’ve made in the last eight months.)  After arriving in Kota Kinabalu and getting situated at my first hostel, it quickly became clear that I didn’t have the right tools for this project.  Instead of hiking boots and reliable rain gear I had sandals and a four-year-old bathing suit.  (Better than a four-year-old’s bathing suit I suppose.)  Instead of cold weather mountain climbing clothes I had sleeveless shirts, a set of cheaply made Thai t-shirts that were $3 a piece, and shorts that quickly fall down to my knees if anything heavier than a pair of keys are in the pockets.

Even worse than everything tangible that I didn’t have was the fact that I didn’t have the desire to spend the remainder of my money to go on the myriad of tours associated with all of the interesting things in Borneo that I had wanted to see.  As it turns out – the most essential supply that I was running low on in Borneo was money.  I left on March 15th for a 2 to 3 month trip to Asia, never imagining that on November 1st I’d still be on this side of the world.

As this trip has stretched from three months to five months and now into November, the concepts of Resource Management and Opportunity Cost have become more and more important as I decide what is and isn’t worth doing for the respective costs of each activity.  In Sipadan I could spend $500 for 10 dives across 3 days and 2 nights, but for half of that money I could rent an apartment for an entire month on Koh Tao.  In Sandakan I could go on a jungle trek for 3 days and 2 nights for $110, but if I got caught in a downpour my laptop and camera would be ruined.  Two nights in Brunei would run me $100 in the cheapest of accommodation, while in Taipei I could live and eat well for more than a week on that same sum of money.  Making matters seem even worse is the fact that for “adventures of a lifetime” none of those things really costs all that much, yet after months and months of three-day adventures…well that money starts to finally add up.

So what am I trying to say?  Going to Borneo was the result of poor project management.  For someone who worked as a project manager for 3+ years you would think that I wouldn’t have run into these problems, but I did.  Perhaps on another day I’ll fully expand on the idea of trip planning and its parallels to project management, but for the time being there are a few examples that immediately come to mind:

Luck is what happens when preparation meets opportunity.

So where does that put me now?  The obvious answer is that I swung the pendulum to the complete opposite side of the spectrum.  After returning to Taipei (a story for another post today or tomorrow) I immediately over-planned, over-analyzed, and over-budgeted everything that would have any sort of impact on the rest of this trip.  I did a full analysis of my resources (money, credit card points, airline miles, travel insurance, time, ect), made a budget, picked a date to fly back to the USA, made New Years plans, started scheduling job interviews, making travel plans for January and February, and more.  Essentially – I’m taking care of the preparation part right now and getting ready for tomorrow. 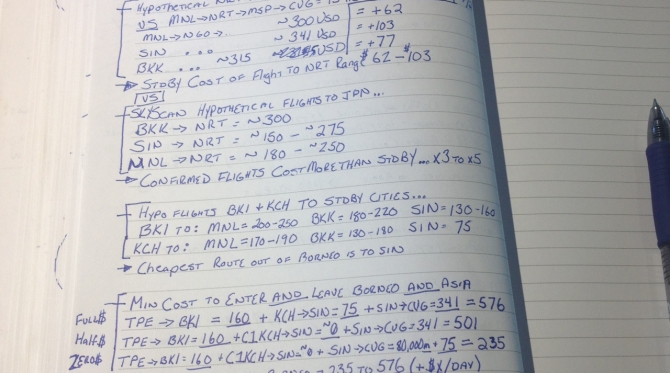 This was just to decide which pants to put on…

Ultimately this trip was borne as much out of the desire to see new parts of the world as it was to take back the remaining pieces of my sanity that had been consumed by 80 hour work weeks, hundreds of daily emails, and impending death by project plan.  That process started eight months ago on March 1st I left that life.  Now, on November 1st, I’ve come full-circle and can openly admit that you do need to have a plan…or at least a rough one.

2 thoughts on “Life lessons from my Borneo boondoggle”